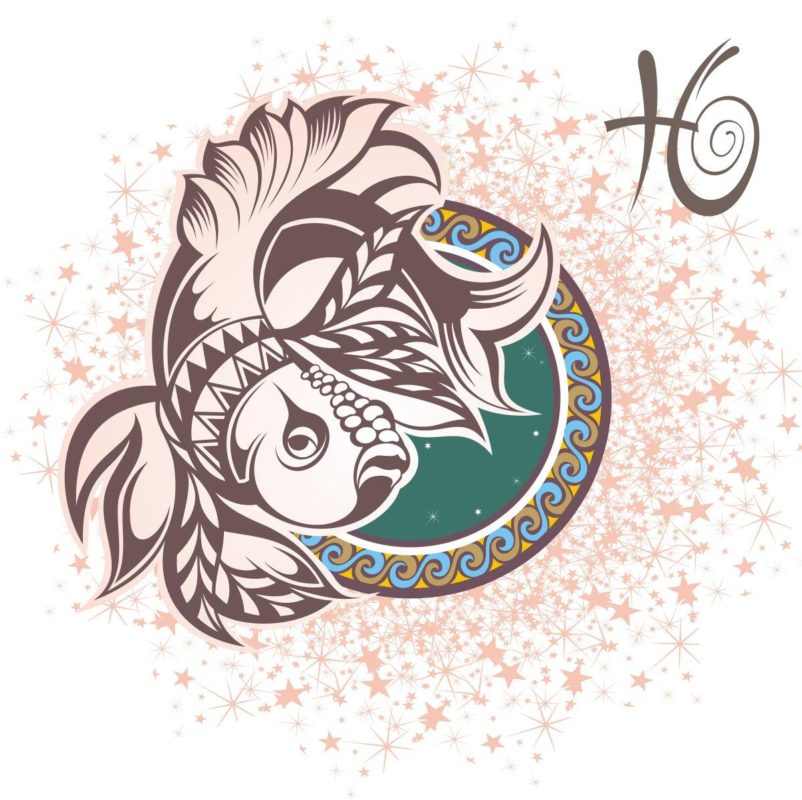 Pisces the twelfth sign of the Kaal Purush chart (Natural Zodiac Wheel). It is the second sign that is ruled by Jupiter.

BPHS: The sign Pisces has the appearance of a pair of fish, one-tailed with the head of the other. It is of the Watery element. It is strong in the daytime and has sattvic qualities. It glides in the water and it’s of Brahmin Varna. It is footless, has a medium sized body, resides in the northern direction. It rises with both head and back. It is ruled over by Jupiter, who is also the teacher of gods. (Ch 4, Shloka 22-24).

Complete Description: Pisces is the third watery sign of the zodiac. It covers the 330° to 360° path of the celestial longitude of 360°; hence completing the zodiac. It is the second sign after Sagittarius that is ruled by Jupiter. The planet Venus gets exalted in Pisces at 0° to 27°, where 27° is its highest degree of exaltation. For Mercury, it’s a sign of its debilitation starting at 0° to 15°, where 15° is its deep debilitation point. It is represented by a pair of Fish (with the tail and head in reverse position to each other). It’s a Dual sign, having Female qualities, and also represents the North direction. It is of Phlegm (Kapha) temperament. Its Varan (Caste) is Brahmin (Priest, Teacher, and Guru). It’s a Diurnal sign, which is strong in the daytime. It has a short Ascension, and abodes in water. It also signifies, temples and shrines, oceans, seas, the rivers where sacred baths are undertaken like the holy river Ganga.

Characteristics of Pisces: The people having Pisces Ascendant or Moon sign are of soft and flexible nature. No matter what obstacles come in their way, they keep on doing their tasks. They don’t like to stick to one place, instead, they like to travel a lot. The Pisceans make good swimmers too. They are passionate and high on energy, however, they lack self-confidence. They are fond of exploring mythological texts, and history. Wherever they go, they can talk about religion at length, as they are a firm believer in God. Rather than getting into the depths of others’ views to understand fully, they make premature conclusions. While taking important decisions, they can put a lot of time to evaluate things with a balanced view, which generally slows down everything. Their inclination towards the God and Supernatural can be seen pretty easily. They can be seen taking part in charitable events actively. People love to interact with Pisceans because of their politeness and the knowledge they possess. However, being closely attached with people, Pisceans are more prone to get emotional heartbreaks quite often due to their oversensitive nature.

“The greatest thing you’ll ever learn is just to love, and be loved in return.” – Moulin Rouge.