Significance of Makar Sankranti or Uttarayan

In India, Makar Sankranti is considered to be a highly auspicious festival. On this day, people worship and make offerings to the Sun god. In India, as per the Hindu lunisolar calendar, this day marks the beginning of the Shishir Ritu (Winter Season). As per the Hindu lunisolar calendar, from this day onwards Sun sets its course towards the Northern hemisphere, which is known as Uttarayan. Though this day is primarily celebrated by the Hindus, with changing times, people of all castes and creeds come together to celebrate this day. On this day, people, especially in northern India, fly kites.

On Makar Sankranti, many people take a customary bath in holy waters. It is also a cultural custom to donate grains, black sesame seeds, sesame laddus, pulses, fruits, and other necessary commodities among the poor. Khichdi, a traditional dish made up of rice and pulses, is also prepared on this auspicious day.

Makar Sankranti has both a religious as well as a seasonal significance. As per the Hindu calendar, it is one of the most auspicious days among Hindus.

Significance of Makar Sankranti 2022 As Per Hindu Astrology 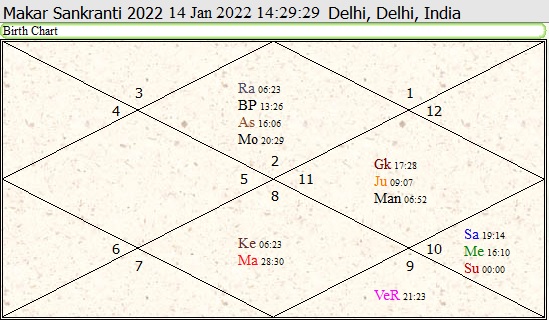 This year Makar Sankranti will begin in the afternoon at 02:29:29 PM. As per Hindu Astrology, any Sankranti that commences in the afternoon denotes the well-being of the people. However, for the Vaisyas (traders/businesses) it is inauspicious. As per Indian Standard Time (IST), Makar Sankranti 2022 will be celebrated on Friday, and when it commences, Taurus (Vrishabha) Sign will rise in the ascendant. It denotes that there will be heavy rainfall in the coming days, and it also signifies that there will be the eradication of all sins for whoever performs rituals and asks for forgiveness for his/her misdeeds.

The Appearance of Sankranti Devi as per Hindu Astrology

This year until mid-Feb 2022, Sankranti Devi will come riding the Tiger, with the sword in one hand and pindipalam (a weapon made up of an iron bar) in the other. She will be wearing red clothes with pearls worn around her neck. Her body will smell like the fragrance of saffron powder. She will be adorning Karnikara flowers. Sankranti Devi’s face will be in the Leo sign. Hence she will be starting her journey from the South direction and moving toward the East direction. She’ll be in a sitting posture. In this state, she consumes a boiled mixture of milk and sugar.

Results of Sankranti Devi’s Appearance as per Hindu Astrology

As this Sankranti is on Friday, the appearance of Sankranti Devi will affect cows and kings (government in today’s time). Therefore, there could be a shortage of food and resources. The government could be facing immense criticism for its policies, wherein people might demand its resignation from power. A dangerous situation of internal and external conflicts such as riots and wars may arise. On a large scale, disease(s) will affect many people. The price of commodities will remain normal.

Here are the Shubh Muhurata timings (IST) for Delhi/NCR region:

During Punya Kaal, one can perform activities such as bathing, offering naivedhya to the deity, shraddh rituals, and breaking the fast. However, if Makar Sankranti falls after dusk, all Punya Kaal related activities are prohibited for that day. One is only permitted to perform these the next day after sunrise.